Reading In the Present – Monstress

Normally I go into the city three to five days a week; but this week that bumps up to about six.  I normally don’t go into NYC on Sundays, but this week Midtown Comics was having a signing with Marjorie Liu to celebrate her new Image Comic series début, Monstress, at their downtown site near Fulton Street.  I already had my two copies since it was already added to my pull list, and picked them up this past Wed at Midtown Comics’ GC location.

This début wasn’t what I expected. For a comic book, it reads more like some of the world building fantasy novels I’ve read in the past (Lord of the Rings, Sword of Shannhara, and stuff like that).  It’s very dense (as it should be at 66 pages for $4.99), with allusions to Latin-Greaco mythology and World War II; fused with Asian Kaiju themes, and augmented with a steampunk-anime environment. Liu and Takeda (whose artwork is amazing and highly detailed) have imagined a vast world of magic, slavery, and extreme violence. Within its pages you will find a coven like matriarchal society: The Cumaea (which I am certain is an allusion to the Cumaean Sibyl, the priestess who presided over the Apollonian oracle at Cumae, an ancient Greek colony located near Naples, Italy). They hold power over the city of Zamora, and it’s hierarchical class-based society. They experiment on, and feed off magical creatures to produce Lilium (another allusion to the Latin etymological origin of the flower name Lily, a symbol of purity).

At its center is a strong female protagonist named Maika Halfwolf (who is not be underestimated, and has a yet to be unveiled destructive power).  Also, I might be stretching it a bit here, but Maika is a French variant on Micah: Hebraic name meaning “who is like Yahweh” or “who is like God” (but with the whole Latin-Graeco and Solomonic Flowers of the Lily thing, I might be onto something here).  There is definitely a lot of symbolism here, and I am picking up on some subtle social commentary.

This series is to be taken in slowly, and so far has proven worth it.  Pick up your copy if you haven’t already. 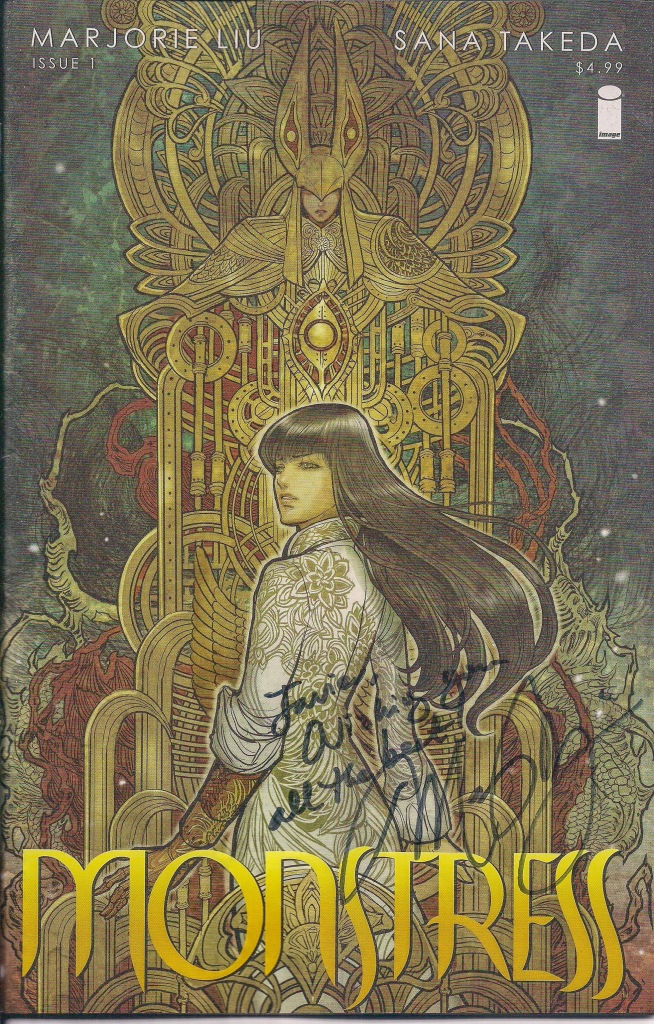 This is my second signing so far (see my post on Gabriel Ba’s and Fabio Moon’s ‘Two Brothers’ for my first).  I’ve always been a loner and introverted, so going out to these type of events is a new thing for me.  You can see my awkwardness in the photo-op below,

Hopefully, after a few more of these, I’ll loosen up a bit.  Still, for me it was really cool, and Marjorie was extremely friendly, and made it easier for me. I’m gonna continue with it.

Tomorrow I meet Neil Gaiman ( I’m a big fan since the Original Sandman Vertigo days and I got lucky; I signed up early, and got a ticket to this event for Sandman Overture) at Beth Elohim (near Grand Army Plaza) in Brooklyn–my place of origin. I was born in Brookdale Hospital, grew up in East New York, and went to Brooklyn Technical High School, so I am familiar with the Flatbush/Park Slope area; but it’s been several years since I’ve last been in area. I’ll post about it tomorrow.

Here are some quotes from Monstress:

“Too bad people don’t rebuild themselves so easily.”

“Here’s something the poets say: ‘There’s more hunger in the wold than love.’”