It’s been over six months since my last blog posts, and in reviewing them it became clear that something was missing.  All that was tendered in these writings, that promised to extol the virtues of the comic book medium and its offerings, was “strict judgment” and a few choice words of appreciation (peppered with quotes)–but the WHY was left unanswered.  There was no evaluation, analysis, interpretation, nor comparison.  The posts were extremely subjective (although that in itself was not bad, they were shallow), and they did not display any deep sensitivity whatsoever in their descriptions.

A different approach was required, but my options were limited.  A redo in life, and returning to school to become an English Lit major was out of the question; but perhaps book driven autodidaction offered a more economical–in both time and money–means for me to acquire the skills and vocabulary necessary to develop a “heightened sense of how literature works and what it does.”  The first reading referred to was a serendipitous find on amazon.com: ‘The Complete Idiot’s Guide to Literary Theory and Criticism,’ by Steven J. Venturino  PhD (and it is hoped that he does not take offense at this subversion of his work).

In addition, I purchased and read A.O. Scott’s, ‘Better Living Through Criticism: How to Think About Art, Pleasure, Beauty, and Truth’ (as to the why, will be made clear in later posts).

The comic book medium, however, is unique from pure literature in that it makes use of both text and graphics to tell its stories.  An improved understanding of Art, and the expressions necessary to “translate visual experience[s] into written language” was also needed.  For this, the following texts were read: Gilda William’s ‘How to Write About Contemporary Art’ and Scott McCloud’s ‘Understanding Comics’.

The hope was that these readings would actuate a metamorphosis in me as a writer, and elevate my experiences of life, art, literature, and its under-appreciated cousin: the comic book. Come join me on this fantastic and amazing textile and graphic journey!

Looks like I found a new hobby: Adult Coloring Books!

You can read more about it here in graphicpolicy.com:

Also, I can”t wait to get my hands on the coming Walking Dead Coloring Book from Image. Read about it in the latest issue of Comic Shop News. 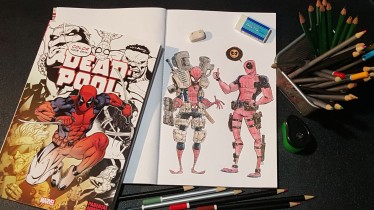